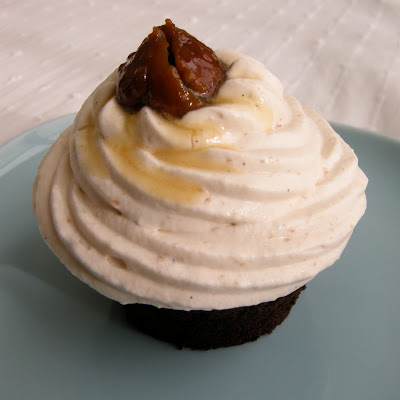 Yup, more chestnuts, and more chocolate too. I think they are a nice pair, much better than chocolate and orange. In previous posts, I seem to have implied that I hate chocolate, but that's not the case. I just don't find it very appealing in bar form. But a cake? Mmm. Oh yes,  and I love labour-intensive chestnuts. I am still working on using up the jars of jam and the candied chestnuts. I made these cupcakes one night when some friends came over for dinner. I had planned to make a layer cake filled with the mousse but ran out of time. In fact the cupcakes my guests got didn't look at all like the above. They got the tin of cupcakes, the mixing bowl of mousse and the jar of candied chestnuts in syrup. It was an assemble-your-own kind of evening. I saved this one for the next morning. A single photograph and it became breakfast. Magic.


For the cupcakes, I used half the recipe for the German Chocolate Cake, baked for 15-20 minutes at 350.

To serve, top the cupcakes with the mousse and candied chestnuts, if desired. Makes 12, with a very generous amount of mousse.

Mary, Mary, I must have one of these cupcakes! I love chestnut - I think it's so under used, if you know what I mean. I'm definitely trying these!, Well, definitely when I get a chance, considering I always overload my plate! lol Love the masala stew below too!

I love making guests work for their food. :D

Yum, chestnut mousse. This cupcake looks so inviting. Love the assemble-your-own idea though.

Now this sounds like a real treat! I love sweet chestnut cream, I'd eat it straight out of the can! And assemble-your-own-food evenings are a great way to keep guests entertained while minimizing your own efforts.

They are also very intuitive and usually follow their gut feeling about someone or something. My introduction to boating was probably about the best a potential first mate could have: A two-week bareboat charter in the British Virgin Islands. The scout series of bags features many characteristics which make it convenient for a man to store and take care of his child. [URL=http://lopolikumino.com ]necrophilic[/URL] India has innumerous wildlife national parks and sanctuaries. So we fertilize-the compost helps our dry dirt to retain water and compensates for the nutrients that it otherwise lacks.

Armed with the information I picked up from this video, and being able to actually see it being implemented right in front of me, I was no longer at the mercy of Lady Luck when I hit the water. In each hidden object scene more items are deemed as tools and may be used on that same scene. A lot of people decide on retiring when they have adequate pension benefits. [URL=http://lopolikuminr.com ]ricercare[/URL] And diet companies don't care! The lighters, designer cigar accessories, and cigarette accessories.

I keep trying to be a fan of chestnuts, Mary, but each time they're so wretchedly dry and awful that I can't bear them. BUT, you just may change my mind with this glorious mousse. :-)