Dear Stone-ground cornmeal,
We need to talk. I've tried really hard to make it work with you, but you just won't soften up, even when I slather you with jam. I'm afraid I can't take it any more. Last time we met, I thought you cracked a filling. You didn't, quite, but I'm afraid it's over between us in the sweet kitchen. I'll be turning to your slick and smooth younger brother, finely ground cornmeal, for my future baking needs. So, I know this is awkward, Stone-ground, but it's not me, it's you. Sorry. I'll still be calling you when polenta is on the menu, if that's okay?
Regards,
Mary 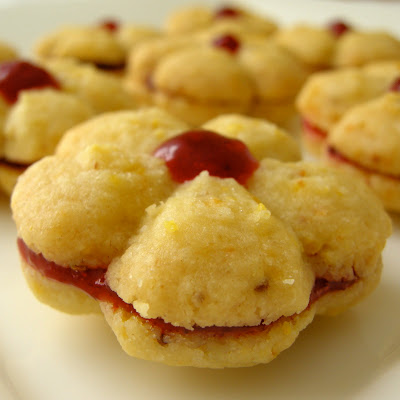 As you might have gathered, these weren't very successful cookies. They looked cute and the flavour and shortbread texture were amazing, but the cornmeal was too coarsely ground to soften up, even after being sandwiched with raspberry jam and left overnight. It's my own fault, as I keep going back to the fancy cornmeal I bought. Luckily it's all gone now, so I can try these again another time with finer cornmeal. The sunshiny colour was perfect for a spring day. 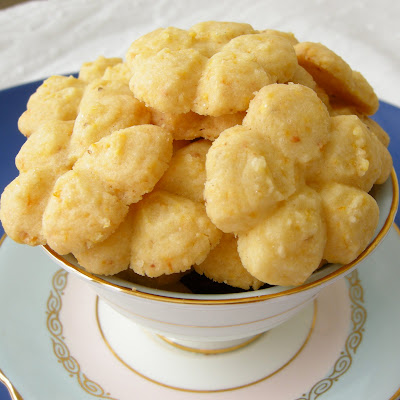 This recipe was selected by Valerie of Une Gamine dans la Cuisine. She was one of the first bloggers to visit me after I started this blog, and she still comes back sometimes! There was no way I would miss her recipe. Her site is beautiful, and she uses a point and shoot camera, like me, but her photos are amazing. Go and check it out. 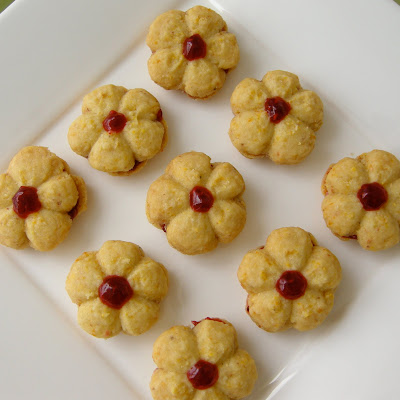 I decided to use my cookie press to make spritz cookies because chilling the dough in a zipper bag and then cutting the bag off and throwing it out just seemed wasteful. I also wanted to make small cookies, and I got an awful lot of tiny cookies from a half batch. I sandwiched most of them together with homemade raspberry jam. The ones I didn't sandwich got dunked in tea and coffee. See what the other TWD bakers came up with here.
Posted by Mary at 11:21 PM 25 comments:

Little lemon meringues, and passionfruit too! 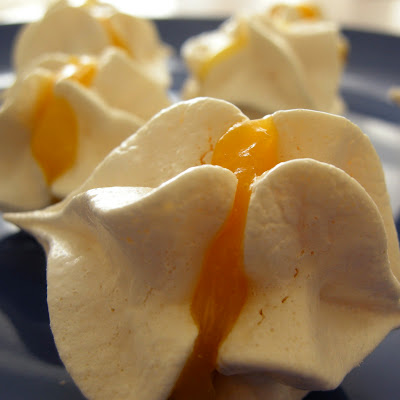 These little cookies are a distant memory at this point. 3 weeks without cooking is just too long! Only one more week before I have a dramatic reunion with my stove. I can hardly wait, but for now I'll have to hope I can elbow my way into someone else's kitchen this long holiday weekend. In case I can't, I'll just have to be satisfied with the beautiful cakes and pastries from the 4 (!) French patisseries around the corner. Maybe being away from my kitchen is not so bad... 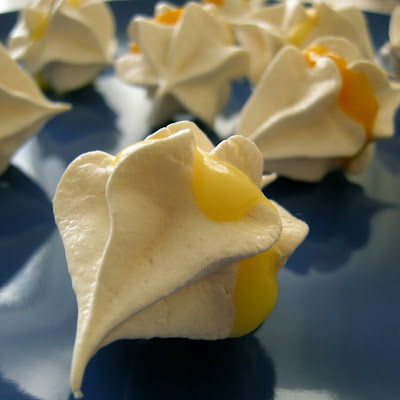 I made these little cuties with the leftover egg whites from the custard tarts. I also had leftover lemon curd from the yeasted coffee cake, and, well, I always feel better if I have passionfruit curd around. I baked the meringues till they were crisp, but didn't fill them until just before eating. The sweet crunch of the meringue combined with the tart creamy curd made these hard to leave alone. I have posted both curd recipes here before, so they are linked below. Happy Easter!
Crisp meringues
2 egg whites
1/2 cup fine granulated sugar
pinch salt
Posted by Mary at 9:51 PM 16 comments: 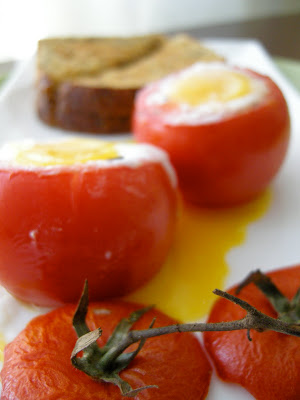 This month's challenge was a fun one, and I was only sorry that I could not create more dishes for it. I found out about a month-long business trip just after the challenge was announced, and I only managed 2 dishes in between frantic bouts of packing, tidying, baking, oh, and working too! Our host for the month was the lovely Renata, of Testado, Provado e Aprovado. She is one of the sweetest people on the Daring Kitchen forums and always has nice things to say to everyone. Not to mention the fact that she's incredibly talented and creative and blogs in English and Portuguese. I'm tired just thinking about it. 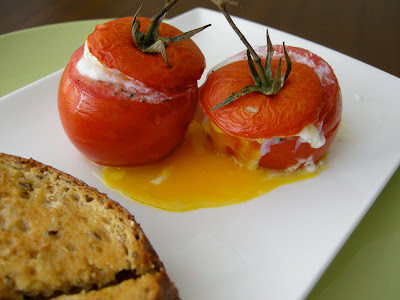 We were challenged to make savoury edible containers and fillings of our choice. The possibilities are endless, and if you check out the Daring Kitchen page, you'll see a selection of amazing dishes. What you can see above are eggs baked in tomatoes. They are delicious and perfect at any time of the day. As you can see, I like my yolks runny, but what you can't see is that I dropped one of the tomatoes upside-down while trying to maneuver it from baking dish to plate. It's a good thing my clumsiness didn't affect the taste. 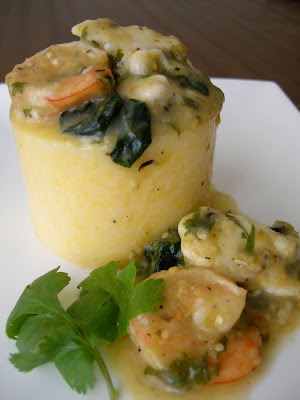 The next dish is one that made leftovers seem new and exciting. I had some shrimp cooked in a tomatillo sauce with spinach and fresh cheese left over from a dinner. I cut cylinders of polenta, grilled them and filled them with the shrimp mixture. Wonderful. I haven't got the recipe with me, but it was based on a Rick Bayless one. 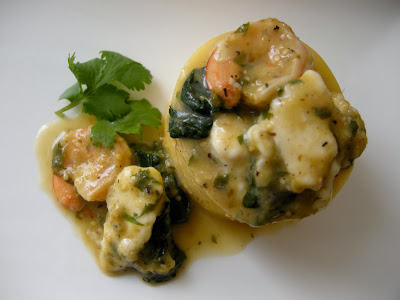 While I didn't go wild with creativity on this challenge, I really enjoyed it and I will be making some more edible containers as soon as I get back home at the end of the month. For now I'll just have to enjoy the best Toronto has to offer, as I am without a kitchen this month. Thanks Renata for a fabulous challenge!
Check out the full challenge PDF and get inspired!
Blog-checking lines: Renata of Testado, Provado & Aprovado! was our Daring Cooks’ April 2011 hostess. Renata challenged us to think “outside the plate” and create our own edible containers! Prizes are being awarded to the most creative edible container and filling, so vote on your favorite from April 17th to May 16th at http://thedaringkitchen.com!
Posted by Mary at 12:01 AM 26 comments:

Quest for rhubarb, and a crisp 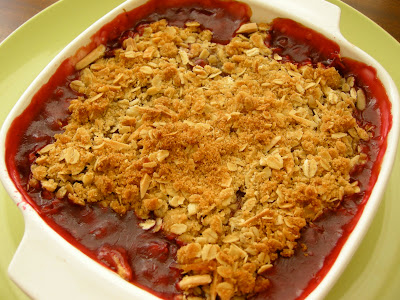 I went to 8 stores in one day and all I brought you was this lousy picture. Sorry. The day the April recipes were announced I started looking for rhubarb, as I'd already been craving it for a while. I went to half a dozen stores, but no luck. I didn't worry too much, as I still had a week before leaving town, The next week the quest started in earnest. I tried everywhere but the closest I came was a shelf labelled 'rhubarb' in the freezer of a health food store. Even the fancy fruit store didn't have any imported rhubarb. What to do? Skipping the recipe was out of the question. I almost bought a jar of rhubarb jam, but worried that it'd be too sweet. I finally found a $7.00 jar of Bon Maman rhubarb compote, which didn't look like much, but was only lightly sweetened.
Of course, nice strawberries were out of the question--I didn't even bother looking for those. I don't love cooked strawberries anyway, so I used frozen raspberries instead. I halved the sugar in the filling and doubled the rhubarb, making the filling a tart contrast to the sweet topping. The bits of candied ginger in the crisp part were a nice touch, but I did find the filling a bit gloopy from the cornstarch. I'll reduce that next time. I ate this for breakfast, dinner and dessert for the last week before my trip and I can't wait to get back home to my oven to make more!
Thanks so much to Sarah from Teapots and Cakestands for choosing this recipe. She'll have the recipe on her site. As always, you will find links to all the takes on this recipe at the TWD site. 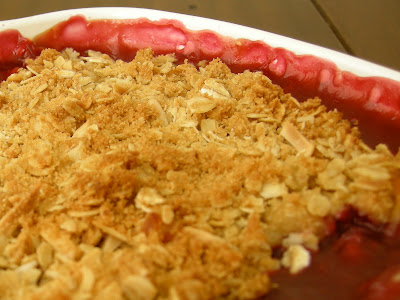 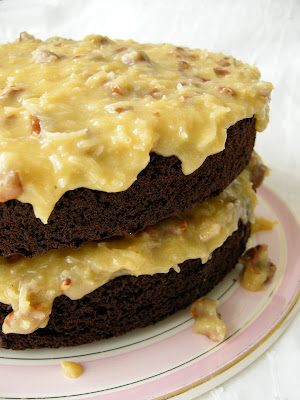 Greetings from Toronto! I am here for a month to work on a short contract, but I have neither a kitchen or my camera, so I'm hoping to have time to share all the things I made last month and didn't get around to posting. I was actually expecting to catch up on responding to comments on the train here, but there was a problem and we had to travel by bus instead. Now, I don't romanticize the train, but it is a hell of a lot more comfortable than a bus. And it has wireless internet. And food that doesn't make you feel nasty the entire next day. Enough about that, I seem recovered now and ready for cake. 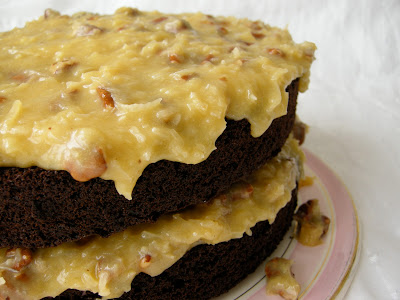 I made this for my brother's birthday. Like me, he is not a chocolate fanatic, but he does love coconut. That's what I told myself anyway, as I've been wanting to make this cake for a while. My mother used to make it for us when we were kids and I don't think I'd had it since. My plan was to use a recipe from America's Test Kitchen via Leite's Culinaria, but there were a few comments about the cake being dry, so I made one from Rose's Heavenly Cakes instead. Not only was it dark, moist and absolutely delicious, it used up a couple of extra egg whites, and I always have those around. The cake has a fairly light texture and stays soft even when cold, though our cake didn't last long enough to need refrigeration. It was huge, so if you can make yours last more than a day or two, keep it covered in the fridge and bring to room temperature to serve.
Cake
Source: Rose's Heavenly Cakes
¾ cup plus 2 tablespoons (2.3 oz/66 grams) Dutch-processed cocoa
½ cup (4 oz/118 grams) boiling water
½ cup (3.7 oz/108 grams) canola oil (I used grapeseed)
4 large eggs, separated, plus 2 egg whites, at room temperature
1 teaspoon vanilla extract
¾ cup (2.6 oz/75 grams) cake flour
⅔ cup (2.6 oz/75 grams) all-purpose flour
1½ cups (10.6 oz/300 grams) superfine sugar
2 teaspoons baking powder
1 teaspoon baking soda
¼ teaspoon salt

Preheat oven to 350℉/175℃. Grease only the bottoms of 2 9" round cake pans and line them with parchment. Cake strips are recommended for the most even cakes, but I didn't use them and it was fine. I also didn't use a stand mixer, just a hand mixer and slightly higher mixing speeds than those noted below. 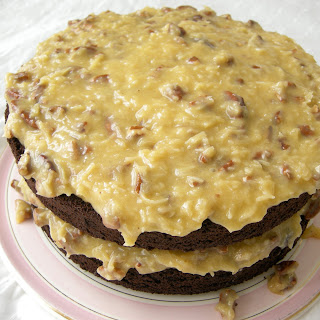 For the topping, I went with the recipe from Leite's, as it just looked better and used evaporated milk instead of condensed, meaning I didn't need to make another trip to the grocery store. I had extra, as I didn't cut my cake into 4 layers. It'd make a great topping or filling for cakes, cookies or cupcakes, if you don't eat it all with a spoon.
Coconut-pecan topping
Source: Leite's Culinaria
4 large egg yolks
One 12-ounce can evaporated milk
1 cup granulated sugar
1/4 cup packed light brown sugar
6 tablespoons unsalted butter, cut into 6 pieces
1/8 teaspoon salt
2 teaspoons vanilla extract
2 1/3 cups sweetened shredded coconut
1 1/2 cups (finely) chopped pecans, toasted

1. Whisk the yolks in a medium saucepan; gradually whisk in the evaporated milk. Add the sugars, butter, and salt and cook over medium-high heat, whisking constantly, until the mixture is boiling, frothy, and slightly thickened, about 6 minutes.

2. Transfer the mixture to a bowl, whisk in the vanilla, then stir in the coconut. Cool until just warm, cover with plastic wrap, and refrigerate until cool or cold, at least 2 hours or up to 3 days. (The pecans are stirred in just before cake assembly.)