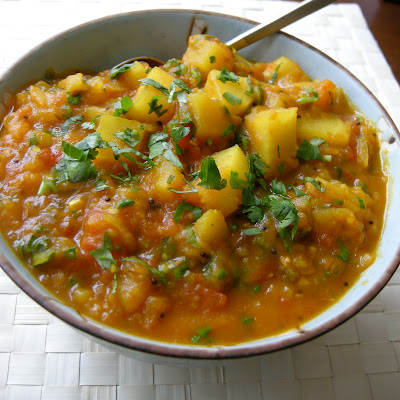 Because I need more school in my life I joined Mr P of Delicious Delicious Delicious and Sanjana of Ko Rasoi in this exploration of spices and Indian vegetarian cooking. We will post on the last day of the month and if you'd like to join you can find a clear explanation here and a list of the first 4 dishes in the 'curryculum'. I love Indian food, as I may have mentioned here and went on a bit about in my appam challenge. I love both sweet and savoury spices and one of my favourites is mustard seed. That was the focus this month and I was in as soon as I saw that. Now, some of you may remember that I am not a big fan of potatoes. In fact, they were the only ingredient I had to go out and buy in order to make this dish. I only bought half the specified weight, which was too bad, as this was delicious. I make an exception for curried potatoes. We ate it on rice for some winterlicious carb on carb action.
Next month: Exploring Carom Seeds with Crispy Potato Bhajia.
Hmm, more potatoes. I will grow to love them. It's in my genes, somewhere.
You can find the recipe on KO Rasoi. 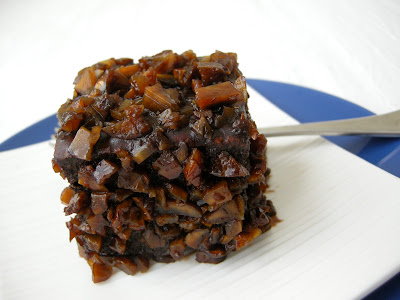 Happy Australia Day! I can't believe I missed it even though we are 16 hours behind. I guess I was too busy watching tennis. Rafa! Mr P over at Delicious Delicious Delicious is hosting Reinvent the Lamington again this year. Well, it's his invention, so I'm not sure who else would host it. Anyway, I look at the amazing creations every year and I come up with lots of ideas, but I've never actually participated before. After leaving a comment over at DDD, I got a reply strongly urging me to get some lamingtons made. And so I did. Nothing earth-shattering over here, but at least I found a good use for my homemade candied chestnuts and chestnut jam. 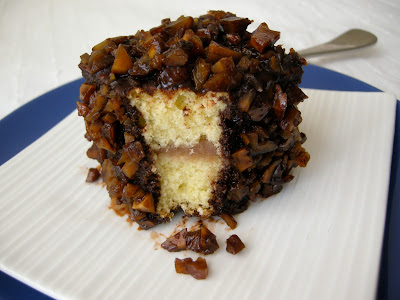 Yes, I made my own candied chestnuts and chestnut jam last fall. It was a dangerous combination of gorgeous autumn produce, sporadic employment and temporary insanity after returning from Ecuador. It was a good thing I wasn't working, as the chestnut jam took all day to make and the candied chestnuts took about 4 days. By that time I couldn't be arsed to blog about them or even take photos. In fact, I couldn't even eat the stuff as it just tasted like too much effort for 5 small jars. The candied chestnuts, which never softened enough, have been taking up valuable real estate in the fridge and the jam has been languishing on the counter. I gave 2 jars away at Christmas and nobody knows what to do with it. So, I made some chocolate and chestnut mousse cupcakes last week and now lamingtons. If you have any other ideas, please let me know. I have 2 jars left. And no, I'm not sending it to you unless you pay the postage. Sporadically employed, remember?

I made ⁴/₇ of this recipe for the cake and ½ the glaze recipe for 9 lamingtons. Instead of chestnut, you can leave them unfilled or use another jam. Roll them in the traditional coconut or nuts instead of chestnuts. I also made some with coconut and a lovely raspberry cassis jam that a friend made. Too bad I ate them/gave them away before getting photos--they were the prettier of the lams.
Posted by Mary at 10:18 AM 7 comments: 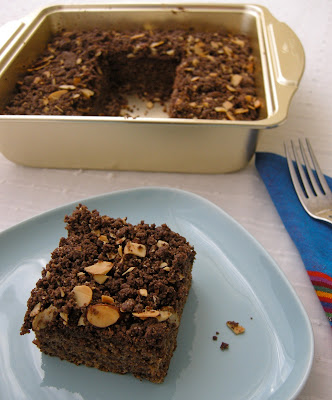 After making the atole in the previous post, I was left with almost a whole package of Ibarra chocolate. I looked in my Mexican cookbooks for ideas and found this cake. I think Rick Bayless makes amazing Mexican food, but I don't think he's much of a baker. This cake was good hot out of the oven (you can see above that I helped myself to the middle piece), but I found it very firm when it was cool. It reminded me of those snack cake mixes I used to beg my mother to buy as a child and then never ate once they had cooled off. Why a boxed mix? I thought I was deprived with all the homemade food we had. Silly me. 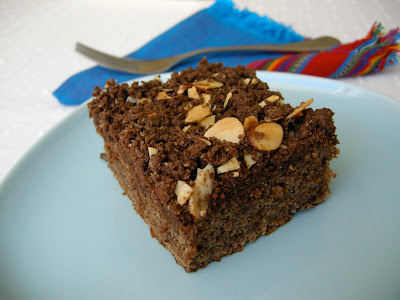 Anyway, if you have nostalgia for the snack cakes of yore, this is for you. It's not extremely chocolaty and the streusel is not too streusely. Hmm, I'm not a big fan of either chocolate or streusel. This poor cake never stood a chance.

Mexican Chocolate Streusel Cake
Adapted from Mexico One Plate at a Time, Rick Bayless et al
Makes one 9"x13" cake (I made a half recipe in an 8" pan) 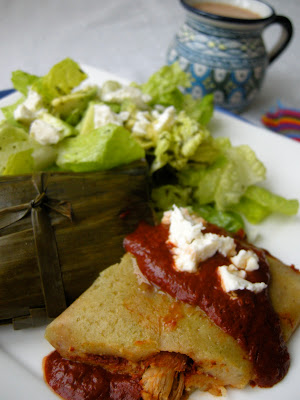 My favourite memory of my first trip to Mexico was learning to cook many special dishes. I stayed for a month, with a former student in Queretaro. In the evenings, I helped her to plan her lessons in English, as she was also a teacher, but I had the days to myself. I did a lot of wandering around on my own and her mother and sister took me to different markets and restaurants, gathering ingredients and being invited into the kitchen. It was hilarious, because neither of them spoke any English and I didn't know much Spanish. We were all comfortable in the kitchen, though. I really must do a post on some of those dishes, but right now we need to talk tamales! 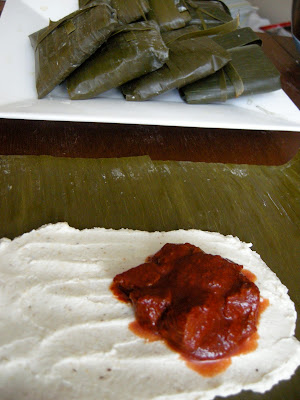 This was just about the best cooking challenge I could imagine. I had been wanting to make tamales for a long time, and in fact had had a bag of masa for tamales in my freezer for ages for just that purpose. I almost chose them for my own Daring Cooks' challenge but went Indian instead. The only thing holding me back was ... sheer laziness. I had heard that they were a lot of work and as you can see by my sparse posting here I just wasn't in a blogging mood. Maranda's challenge was just the kick in the pants I needed. I made two varieties: the ones above are pork cooked in guajillo chile salsa and wrapped in banana leaves. Below are chicken in a green chile and tomatillo salsa and wrapped in corn husks. 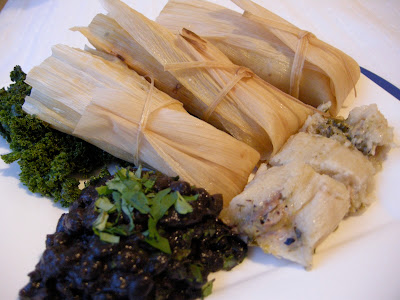 I much preferred the chicken ones. The corn husks were easier to work with than the banana leaves and the filling was far tastier. I think I got a dud batch of guajillo chiles, because the filling was bland. I ended up spicing up the remaining sauce with a couple of chipotles in adobo and that did the trick--wish I had thought of that when filling them. So, were they a ton of work? I don't think so. I spaced out the making of the filling and preparing the wrappers, then was able to wrap and tie about 25 corn and 18 banana tamales in the time it took to watch 1 episode of Mad Men. That Don Draper sure does make time fly. Then I steamed them and gave some away and froze the rest. 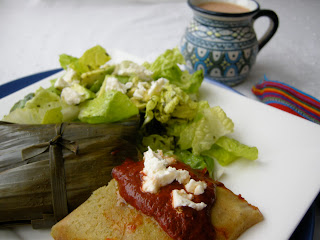 That cup in the back is one I got in Queretaro just before I left. It is my Mexican hot chocolate cup (I have many dishes that are only used for one specific food). I tried my hand at atole to accompany the tamales, as it is traditional. Atole is like hot chocolate thickened with corn masa. It's as thick as heavy cream, but made with a mixture of water, milk, masa and Mexican chocolate. I never liked it before, as it has a distinct corny flavour, but I added a dash of almond extract and ended up drinking 2 cups instead of eating the plate you see above. It was astonishingly good. Here's the recipe:

⅔ cup masa harina mixed with ½ cup warm water
8 ounces chopped Mexican chocolate (Abuelita or Ibarra)
3 cups water
3½ cups milk
1 teaspoon almond extract, optional
Thanks so much to Maranda of Jolts & Jollies for such a fun challenge! You can see all the beautiful results on the Daring Kitchen homepage. Click here for the full challenge pdf with recipes, links and photos.
Blog-checking lines: Maranda of Jolts & Jollies was our January 2012 Daring Cooks hostess with the mostess! Maranda challenged us to make traditional Mexican Tamales as our first challenge of the year!