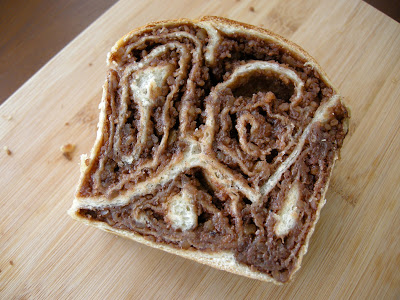 I was so happy to get back into the swing of participating in Daring Kitchen challenges after missing a few! This recipe was just the kick in the pants I needed, though those pants may not fit for long if I keep picking at this bread. It is completely addictive, and I find myself wanting a slice at breakfast time, with tea in the afternoon and for dessert too. It's also a lot of fun to play with: by unraveling the spirals as I eat I can make a slice of this last for a long time. Not long enough, though: I offered about ⅔ of the loaf to a friend, but we haven't managed to meet up yet, and I am sorry to say that I started in on her share of the bread this afternoon. I plan to make another of these soon, so she may have to wait for that!
Complete challenge and recipe in this handy PDF. Make this and you'll be a hero. Thank you to Jenni of The Gingered Whisk for a fantastic challenge! See some of the other beauties in the Daring Kitchen slideshow (not sideshow).
Blog-checking lines: The Daring Baker’s October 2011 challenge was Povitica, hosted by Jenni of The Gingered Whisk. Povitica is a traditional Eastern European Dessert Bread that is as lovely to look at as it is to eat!
Posted by Mary at 12:01 AM 20 comments: 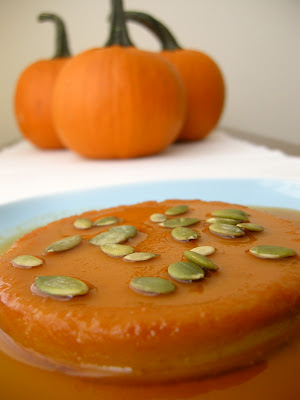 Right after I got home from Ecuador, I took my nephew up to my aunt and uncle's farm to get some pumpkins. We had different goals, James and I, but we both came home happy. He got a pumpkin 'big enough to fit Poppy (his sister) in', as well as some quality time admiring the tractors. I scored 15 pie pumpkins. My plan was to make pumpkin pie for Thanksgiving, but we were missing something crucial, though I can't remember what it was now. That left me with a cooked pumpkin, so I brought it home and got to work. I made a pumpkin loaf, which was delicious, but got eaten before the camera-computer issue got fixed. Then I made this, which is just like pumpkin pie filling without the crust, and with a caramel sauce. It's smooth, creamy, dense and pumpkiny.
Pumpkin Flan
Serves 8 according to the recipe, but I think it's enough for at least 12--it's quite rich
Source: Adapted from Gourmet Today
2 cups sugar
1 cup heavy cream
1½ cups whole milk
5 large eggs
1 large egg yolk
15 ounces pumpkin puree (I used fresh, but this is equivalent to one can)
2 tablespoons dark rum
1 teaspoon vanilla extract
1 teaspoon ground cinnamon
1 teaspoon ground ginger
½ teaspoon freshly grated nutmeg
¼ teaspoon salt
a handful of pumpkin seeds for garnish (optional)
2-quart/liter souffle or round casserole dish (I used small ramekins)
Preheat oven to 350℉.
Caramel:
Heat 1 cup sugar with ¼ cup water in a heavy saucepan over medium heat, stirring until sugar is dissolved, brushing down the edges of the pan with a wet brush to rinse away any sugar crystals. Boil until it is a dark amber colour, then immediately pour into dish or dishes and swirl to distribute evenly. Set aside while you make the flan.
Flan:
Bring the cream and milk to a simmer in a heavy saucepan over medium heat (I used the same saucepan, and didn't bother to wash it--the hardened caramel with dissolve). Whisk the eggs, yolk and remaining sugar together until well blended. Add the pumpkin, rum, vanilla, spices and salt and whisk. Add the hot cream mixture in a stream while whisking. Pour mixture through a fine-mesh sieve into a bowl, pushing mixture with a spatula to force it through. Pour custard into caramel lined dish or dishes. Place into a large roasting pan, place pan in preheated oven and then pour boiling water to come at least halfway up sides of dish. Bake until flan is golden brown on top (small ones won't brown as much) and a knife inserted in the centre comes out clean, about 1¼ hours. Transfer dish to a rack to cool. Once cool, cover and refrigerate for at least 6 hours, overnight is even better. The longer it sits, the more caramel dissolves, giving more sauce.
To serve:
Run a thin knife around the edges of the flan to loosen it. Shake the dish gently until the flan moves freely in dish. Invert a large platter deep enough to catch the caramel sauce over the dish and, holding them tightly together, quickly invert and turn flan out on platter. Sprinkle with pumpkin seeds just before serving.
See you on Thursday with the Daring Bakers' reveal!
Posted by Mary at 5:46 PM 5 comments:

I'm back, with Rarotongan Coconut Rolls

Hello! Is anyone out there? I have been back in Canada for 2 weeks now and am finally getting around to posting something. Unfortunately it's something I made before I left, but I am still having computer problems. I have a new hard drive, but iPhoto is not working properly, meaning no new photos, and no photos from Ecuador. Since returning, I haven't baked much, worked much or done much of anything. I just want to jump back on a plane (preferably without any airports involved) and be somewhere else, away from everyday responsibilities. That's not happening right this minute, so I'll post this and then head back to the computer shop so that I can share the results of pumpkinfest 2011. Brace yourselves.
I have had this recipe bookmarked for ages and finally got around to making it in a fit of baking before I kissed my stove goodbye for 6 weeks. My family and I are huge fans of coconut, and my nephew likes to help too. While trying to entertain him at my mother's non-childproofed house, we gave him a coconut and a hammer. What followed was hilarious, with James chasing the coconut around the garage and swinging the hammer with abandon. I know, not safe, but nobody lost an eye, the kid was entertained and I got enough coconut to make these buns. Win-win, no?
Not exactly. More lose-win. I loved the coconut sauce and could see myself eating it on just about anything. I left it at my mother's and she was contemplating pouring it over ice cream. The buns, though, were a bit of a disappointment. They did not have the texture of yeast buns, but seemed more like bad biscuits or scones: heavy, with a dense crumb. I proofed the yeast, but they just did not rise much and the amount of liquid called for did not even make crumbs, much less a kneadable dough. There were comments noting this on the original recipe, so I can't say I wasn't warned. I'll be making these again, but using a different yeast dough recipe. Maybe this one from King Arthur Flour?
Here's the link to the original recipe, from the lovely blog Pease Pudding.
Posted by Mary at 12:02 PM 15 comments: