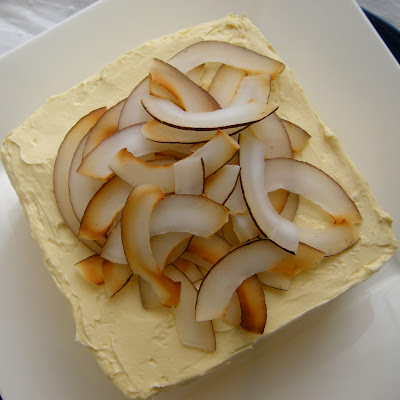 Do you sometimes have trouble paying attention when you are baking? I have trouble paying attention at the best of times, but making this dessert was more difficult than it needed to be because I was in space cadet mode. I blame it on all the kindergarten I taught this week--many little kids and their snowsuits and winter accessories turn my brain to mush. I only decided to make this dessert at the last minute, as I was worried it would be too rich and too sweet (it is basically buttered meringue, after all). To balance the sweetness a bit, I made a grapefruit curd to add to the buttercream. I reduced the grapefruit juice by half, which meant that the curd was a bit too bitter on its own, but it was perfect in the buttercream: difficult to identify, but encouraging another taste to figure out the mystery ingredient. Too bad I only had pink grapefruits--red ones would have made for a prettier frosting. 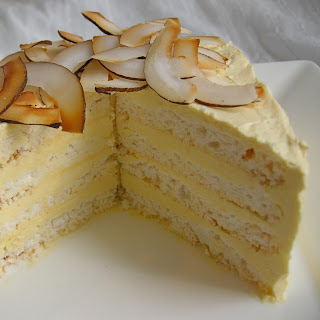 I made a small version of this, using 5 eggs in total: 2 for the curd, 3 whites for the dacquoise and 3 yolks for the buttercream. The original recipe calls for 10 egg whites and 5 yolks for 12 servings, but I got 8 servings from my mini version (13x13x6.5cm). Instead of baking it in pans, I traced a paper CD envelope onto the foil using a chopstick. I wanted to pipe the meringue mixture, but I got two, yes two, yolks in the meringue so it wasn't the most durable stuff. I started out well, separating the first egg neatly. Then, who knows what happened, but I cracked the next egg with such force and flung it in the bowl before noticing that I had mixed yolks and whites, and the yolk was broken. Oops. I scooped it out and did the very same thing with the next egg. This yolk was really broken up and I was unable to remove it all from the whites. I considered pitching the whole thing but I was out of eggs. So, with a few choice words, I started beating the whites anyway. It worked rather well, and I got fairly stiff peaks. So, I folded in a pile of unsweetened coconut and that's when I got a bit worried. Rather than manhandle (Maryhandle?) it any more by putting it in a piping bag, I quickly spread it with a palette knife, got it in the oven and hoped for the best. It was fine, so don't panic about a tiny bit of yolk in your egg whites!
The French buttercream was easy to make, and not as fussy as the meringue one I usually choose. I always find that moment when you are beating the butter in and it finally comes together a bit off-putting. It's when the bowl of beaten yolks (or whites) begins to look exactly like a bowl of beaten butter. That's when I start to calculate just how much butter will be in every piece and how many pieces I am likely to eat. 2 tablespoons, in case you were wondering, and totally worth a brisk walk or ten. I'll always choose real buttercream over that nasty, gritty powdered sugar stuff. 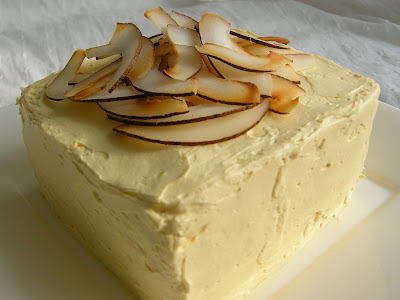 Putting it together was easy enough, except that the kitchen was quite warm by this time and frosting each layer pushed the ones below off kilter. I eventually got it somewhat straight, so I just left it alone, intending to fix it up the next day. That didn't happen. Instead, I added a few flakes of fresh coconut and dug in. I don't think my Sans Rival is going to rival any of the beauties you'll find on the Daring Kitchen, but it tasted great! Thanks to Catherine for a fun challenge. Now, what to do with the extra buttercream and grapefruit curd???

Blog-checking lines: Catherine of Munchie Musings was our November Daring Bakers’ host and she challenged us to make a traditional Filipino dessert – the delicious Sans Rival cake! And for those of us who wanted to try an additional Filipino dessert, Catherine also gave us a bonus recipe for Bibingka which comes from her friend Jun of Jun-blog.
Posted by Mary at 12:00 AM 33 comments: 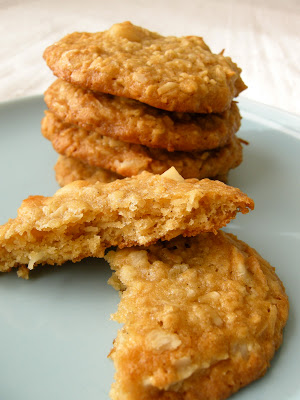 Do you bake to create something new? To recreate a taste memory? To use up a surplus of ingredients? Or just because you need something sweet? I bake for all of those reasons, but this recipe is one in a series of cookies I've been making over the past few years trying to recreate a teenage indulgence. I was never a mall rat, but whenever I did go I would pick up a cookie at a famous cookie franchise. It was called Mrs. something or other... They were huge and chewy with a centre verging on raw. I loved them and could make one last all day. Like I said, they were huge. This chain sold lots of cookies but this one was my favourite for a number of reasons: it did not contain chocolate; it had coconut; and macadamia nuts. Oh and I did I mention the size? It does matter.
A few years ago I was at a mall and went to pick one up only to find they had been discontinued for years! Like I said, I'm not a big shopper. I was disappointed so I set out to make them myself. Over the years I've taken a few cracks at the recipe, but my results have always been too cakey or too crisp. Sometimes the cookie didn't spread at all, other times it spread all over the place. I even tried to adapt a few ANZAC biscuits recipes, as they are full of oats and coconut, but they weren't quite right either. My most recent attempt is the first I have been mostly happy with. It's almost thick enough and chewy--almost too chewy. I used golden syrup instead of white sugar along with old-fashioned rolled oats and shredded coconut, but will try quick oats and flaked coconut next time. And maybe change the ratio of flour to coconut/oats to give me exactly what I'm looking for. That said, these were delicious and if you're a cookie dough monster like me you'll love them raw or baked. 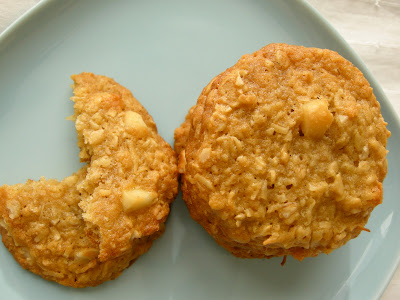 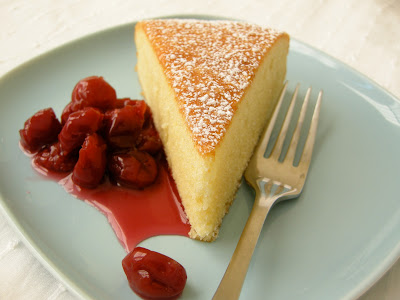 Over 2 weeks have passed since my last post, but I am still having trouble getting into a blogging frame of mind. I find it really hard to find anything I want to bake, much less write about (I hate writing) and it doesn't help that it's getting dark at 4pm and I can't take photos. I haven't even been baking much, which means I probably should see the doctor. So, complaining aside, what's been on the menu? Lots of spicy food and this one lonely cake. I made it when a friend was coming for dinner. It was the perfect end to a simple meal, no adornment needed. If you like to gild the lily, raspberry coulis, candied sour cherries or any fresh or cooked fruit would make a wonderful accompaniment. This recipe is from a cookbook I've had since I was a teen, and I've been making almost that long, though I had forgotten about it for a few years. I simplified it by making the whole thing in a food processor, and I won't go back to the mixer for this cake, as the food processor does a much better job of breaking up the almond paste anyway. Yes, almond paste. Aren't you glad you kept reading? Try it--it's a moist and tasty cake, and a good keeper too. 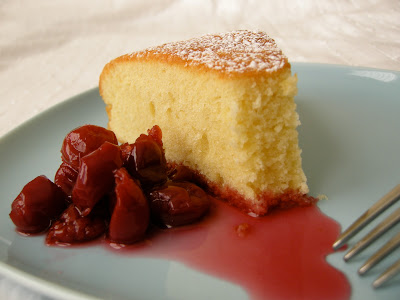