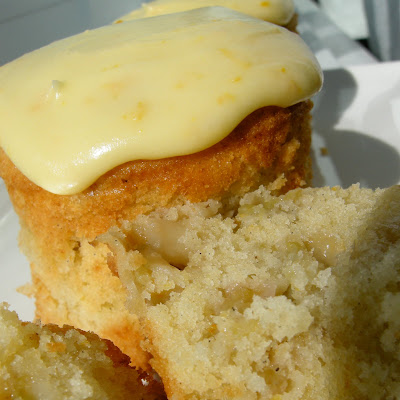 This is the last rhubarb recipe, I promise! Till next year, anyway. I have about 12 things I didn't get around to making this year on my mental to-do list. Don't worry, I'll probably forget at least half of them.
I made this recipe twice last week, because it was that good. That good, but problematic too. The first time, I made a half recipe in a loaf pan, as the recipe called for, and it was delicious, but too tender. Too tender is usually not a problem with cakes, but this was impossible to slice. I ended up bringing a container of icing covered crumbs to school. They were all eaten, as teachers are not that fussy, I guess. Especially when it comes to a soft cake with rhubarb melted into it, leaving behind a tangy flavour. The second time I made it I decided to make individual cakes. I'd call them cupcakes, but I haven't got a cupcake tin, and so I used ramekins, which made for 7 slightly-too-large-for-one serving cakes out of another half recipe. I think you'd get a dozen if you use a regular muffin tin. Or refrigerate your cake for easier slicing. But cold butter cake? It doesn't appeal to me much, as it gets so firm.
This recipe was adapted from one in Rustic Fruit Desserts, by Cory Schreiber and Julie Richardson. They call it Lemon buttermilk rhubarb bundt cake. Makes 1 bundt cake, 2 dozen cupcakes, or 2 loaf cakes. Go ahead, make the whole recipe. Otherwise you'll just make it again the next day.
Cake:
2½ cups plus 2 tablespoons all purpose flour (12½ ounces+⅝ ounce)
2 teaspoons baking powder
1 teaspoon salt
1 cup (8 ounces) unsalted butter
1¾ cups (12 ounces) granulated sugar
zest of 1 orange
3 eggs
¾ cup buttermilk
1 pound rhubarb, trimmed and very thinly sliced (3 cups or 12 ounces prepared)
Preheat oven to 350℉, and butter your pan(s).
Sift the larger measure of flour, the baking powder and salt together. Cream the butter, sugar and zest together for 3-5 minutes, until light and fluffy. Add the eggs one at a time, scraping the sides of the bowl after each addition. Stir in the flour mixture in 3 additions, alternating with the buttermilk in 2 additions, beginning and ending with the flour. Scrape the sides of the bowl occasionally. The batter will be very thick, but that's fine, because the rhubarb will release a lot of liquid.
Toss the sliced rhubarb with the 2 tablespoons flour and fold it into the batter. Spread the batter evenly in your prepared pan(s).
Bake for 20-25 minutes for cupcakes, 55-65 minutes for a loaf cake, and an hour for the bundt cake. Bake till the top is firm and the centre springs back when lightly touched. A toothpick will come out clean. Cool on a wire rack for 30 minutes before unmolding. Turn right side up to cool completely.
Orange glaze
2 cups (8½ ounces) sifted icing sugar, or more as needed
juice of 1 orange
1 tablespoon soft butter
Whisk the glaze ingredients together. The mixture should be thick, so don't add all the orange juice at once. Add more sugar or juice to get the consistency you want. Spread over the cake/cupcakes as soon as you remove from the pan. (I preferred the cake without this, as it was very sweet)
Apparently this cake keeps for 3-4 days, covered at room temperature. I ended up keeping mine in the fridge, because it was so hot, but the texture was better at room temp. 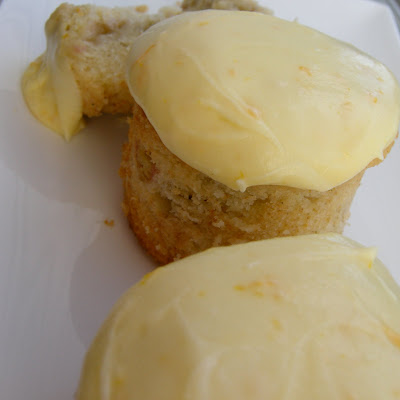 mmmm! i do love the way the thin slices of rhubarb almost do melt into cake. looks super moist and lush with that icing!

HI Mary! I've been follwing your blog for a while now! And I always love to see what you come up with next! This look so yummy!! Thanks for stopping by my site!

these look amazing! will have to try them for sure!

Do NOT appologize for too many rhubarb recipes. Who can get enough of them? beautiful stalks and the more ways to enjoy them, the better. The photographs here are OUTSTANDING and the density and moisture of the cake is so evident. The frosting looks like I want to brush my teeth with it. YUM! I can't wait to try this one.
:)
valerie

That cake and especially the glaze on top is to die for! I have never had rhubarb but I would it and make this cake with another fruit if I have to!
Thanks for the invite, you are too sweet! I have never been to Montreal but hear great things about it. Of course, I don't know how long my son will be there!

It looks so yummy! Too bad we don't have rhubarb here in the Philippines. I would have wanted to try this recipe :)

Rhubarb and orange sound so good together.

oooh wow rhubard and orange how delicious. looking at this is making me hungry hehe!

Oh how lovely, the glaze looks absolutely perfect too. I wish my husband like rhubarb!

Well, that recipe made eight ramekins of cake PLUS two 6-inch cakes. And now for the glaze.