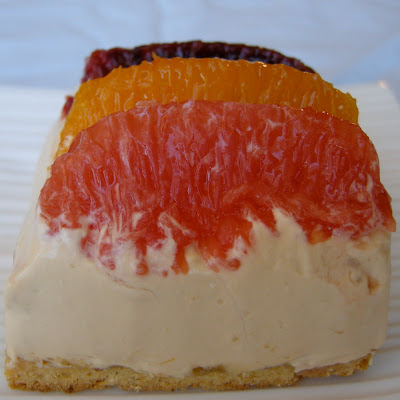 Tian? What? It certainly sounds fancy, doesn't it? A tian is a layered dish, either sweet or savoury. The required components for this month's challenge were:
I was excited about making marmalade, as I have made all sorts of preserves before, but never marmalade. I got so excited that I made about 3 litres of the stuff, or 14 jars! I used a tablespoon in the tian recipe, so there are leftovers. Want some? I've been eating it instead of ginger honey on my toast, but considering I don't eat much toast, it could last a while. I made it with Seville oranges, and it was delicious, but there was definitely a bitter undertone.  The colour was beautiful, so I may just hang a jar in my window as a suncatcher. Except I don't get much sun in my apartment. This photo was taken at my mother's--she gets lots of sun. 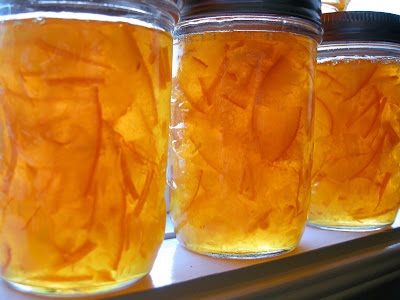 I really spaced out the components of this challenge. About a week after the marmalade I made the caramel and segmented the oranges (navel and blood) and grapefruit as they had to sit overnight in the caramel. The next day I made the pâte sablée and realized I had no whipping cream to make the filling. So, the citrus got an extra day in the caramel. At least some of it did--it was pretty tasty.
The next day it rained and was completely grey outside, so I postponed again. My north-facing apartment gets little enough light as it is, and I couldn't get enough to photograph anything in natural light. Of course I haven't got lights--I'm using a point and shoot camera! So, I just ate a bit more of the fruit and hoped I'd have enough to put the dessert together. 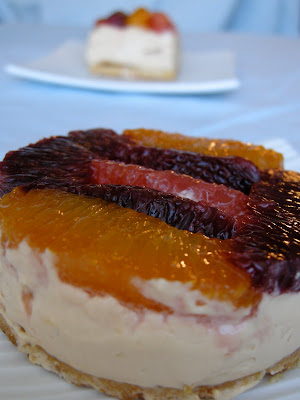 Once I finally remembered to pick up the whipping cream and the weather cleared up it came together really quickly. The recipe called for stabilizing the cream with gelatin, but since I was only making 2 small tians I didn't think this was necessary. I had read in Rose's Heavenly Cakes that dulce de leche could be used to sweeten and stabilize whipped cream, so I did that, as I thought that it would be nice with the caramel sauce, and it was. I already knew that dulce de leche went very nicely with the pastry, as I had made cookies out of the leftover pastry, sandwiched them together with dulce de leche and used them for Tuesdays with Dorie just a day earlier. Recycling is in, people! 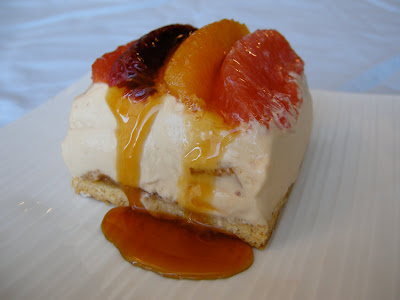 These were delicious! The crisp and buttery pâte sablée base with the caramel whipped cream, fresh citrus and more caramel sauce made for a great combination. I used Seville orange juice in the caramel sauce, so it was not very sweet. The marmalade in the cream was a nice surprise too. Well, not really a surprise, since I had just made it, but I was still somewhat surprised to find it there. Not paying attention can have its benefits!
Mandatory blog-checking lines: The 2010 March Daring Baker’s challenge was hosted by Jennifer of Chocolate Shavings. She chose Orange Tian as the challenge for this month, a dessert based on a recipe from Alain Ducasse’s Cooking School in Paris.
Thanks Jennifer for a great challenge! Check out the slideshow to see what all the rest of the fabulous Daring Bakers have come up with this month.
:)


Recipes after the jump.

The marmalade in the jars are just gorgeous! I loved making the marmalade as well. Beautiful contrast of the blood and navel oranges. Oh and dulce de leche for the cream--that must have tasted heavenly!

What a great idea to put the dulce de leche in the cream. I can imagine it would have so delicious. Mouthwatering pics!

Love the photo of all that gorgeous marmalade!

The photo of those marmalade jars are just glorious! And what a great idea to add dulche de leche, that Rose sure knows her stuff :) Great work, it looks gorgeous.

14 jars! That's a lot of marmalade. I liked the suncatcher idea. ;-)
Your Tian looks lovely, with the different coloured segments on top.

Woah that's a lot of jam! And I love the different colours of the orange segments! :)

Mary, that last picture is a work of art. I understand the woes of using a point & click, especially when the weather refuses to work with you. Great work! Love the idea of dulce de leche whipped cream.

Wow - that's a lot of marmalade! And I will definitely have to try dulce de leche whipped cream - that sounds SO decadent. I love the colors with the three different citrus fruits - truly beautiful. Great job on the challenge!

I think your use of the different citrus looks fantastic - and probably adds a real depth of flavour to your finished dessert - well done!!!

Your tian is so gorgeous! I love the combination of colours of oranges =D. I can imagine that dulce de leche is a fantastic addition to the whipped cream - Yum!

Oh Mary, they're lovely! Dulce de leche is so wonderful - it must be divine here. The three colours look very striking.

Oh waouw ! Your tian look so beautiful too.
very good idea segments and colors of various fruits, is very original.
Your jam looks so perfect, beautiful color and zest are fine, it's very beautiful.

Your tians are lovely!!! The diferents colours and the marveloues marmalade....uhmmmmm....
I also think that the marmalade inside the cream its a good idea. And to put the dulce de leche it's nice also.
Un saludo, Begoña

Wow I am so glad I discovered your blog! You have given me such great ideas! Love love love your tian and I'll bet the whipped cream was stunning using dulce de leche. I must try something like that. Your tian is really beautiful with the layers of color.

Beautiful, with the combination of citrus and color! Nicely done!

Your orange segments look so juicy they're popping off the screen! Very pretty marmalade as well :)

Beauty! So many oranges, no wonder it tasted good. I too like the dulce de leche in the cream.

Wow your tian looks so beautiful with all the different colours. Your marmalade is the star, can't believe you made 14 jars! I used all of mine(by accident) Thanks for the tip about using dulche de leche.

The marmalade looks yumm!!! love the diff colors on the tian!

Ciao Mary , these photos light or not are great ! i love the three colors !

I love the first photo, with all three colors of citrus! I can definitely relate to timing my baking when there is the most natural light. Your pictures look amazing, and the tian sounds delicious with dulce de leche!

Love the marmalade picture and the three colored tian. Contratulations!

amazing colors in your tian. a citrus medly! great job. I wish I knew more about canning/preserving. I love marmalade but the whole preserving thing scares me. I wish I lived near you so I could help take some off your hands!

That marmelade looks gorgeous and your tian are so tempting! Beautiful!

I really love your combinations -and your photos are beautiful

I would never have thought of dulce de leche in the whipping cream... great idea for those of us trying to not use gelatin! Your tian are beautiful with the three colors of citrus. Great work!

Those shots of your marmalade are just gorgeous, great job <3

Love the photo of the three different citrus colors together! Great job!

I love all the different colors of your oranges and grapefruit! Wonderful!

Beautiful job! Your tians look fantastic, and I love the jarred marmalade!

I love the photo of the jars and of course your Tian. Well done!

I love the idea of dulce de leche and whipping creme!

I love your tians colour...and surely also the taste is fantastic with dulce de leche in the cream!!!
great idea!
kisses
Ago :-D

Brillinat Mary!! I love your jars of marmalade and wish I had the time to make some too... This was certainly a fun and tasty challenge. Well done!

Dulce de leche and triple citrus surely give that extra boost to the taste... well done :)

Mary..your jars of marmalade are like a row of sunset..so beautiful - and your tri-citrus tians are stunning! I cannot thank you enough for your invaluable advice regarding the long, slow cooking of the marmalade in lieu of using pectin. My marmalade turned out great..beautiful caramelization! I only wish I could love orange marmalade!!

14 jars of marmalade sounds heavenly to me! Though I'm not sure where I would store them. I love that you made caramel whipped cream. I had no idea dulche de leche was a stabilizer. Great job on the challenge.

your tian is WOW, love the various citrus colors.

I wish I could have gotten my hands on some blood oranges. I love the tri-color top.
Thanks for visiting my site

Wonderful tian with the combo of oranges. The photos are lovely, too. Very imaginative and effective header. Must admit 14 jars of marmalade sound like a lot. Perhaps Easter gifts for friends?

Beautiful tian! I love the color combination, and the idea of stabilizing the whipped cream with dulce de leche... my, I'm glad I didn't find out earlier or I'd bought a jar and would be eating it at every available moment ;-)

perfection indeed. I adore those jars on the sill.

Your orange marmalade photo is off the charts fab! Great job on the challenge.

oh wow!! I'm so jealous - I desperately wanted to do a Blood Orange tian but just couldn't find any!! Yours looks lovely - and the different citruses would have been divine with the rich cream and caramel. YUM - I want some now!! :)

Beautiful 3 colored Tian! And it's great how you went ahead and made 14 jars of marmalade?? But knowing how yummy it is, i bet it'll be all gone very soon :D

Oh, I love that you used a bunch of different citruses! It's gorgeous that way.

this looks sensational! lovely colorful oranges and so refreshing. 14 jars of marmelade!! wow!

I love the different colors in your segments, very nice. Your challenge looks beautiful and very delicious. Well done! :)

Beautiful--love the color progression of the different citrus fruits, and your marmalade pictures are great. What a great tip about using dulce de leche to stabilize cream! I bet it really was fabulous!

You guys put so much work into your Tians....just gorgeous. They must taste divine! What a great time to work in all the citrus with Easter here. The color of the marmelade is beautiful.....14 jars, nice!!

wow.. talk about leftovers... 3 liters of marmalade.. :)
I love it that you used blood oranges for your tians... I really wanted to used them too, but the closest thing (in color) I could find were grapefruits...

Navel, blood oranges and grapefruit makes a very beautiful combination on your dessert, plus that dripping caramel. Simply tempting!!

Your marmalade is gorgeous!

And although not strictly related to the challenge, I really love the idea of dulce de leche with the leftover cookies!

Good idea to use different citrus fruits in one tian, looks great !

Wow! What a ton of marmalade you ended up with. I used different citrus, too. Loved the flavors. Nice work on yours. Let me know what you decide to use the marmalad for -- I need some ideas! :)

I love the look of your tian, the different oranges are beautiful, I'm so glad you liked my challenge!