Oh, hello. Are you still there? I can hardly blame you if you've up and left. In fact, I left myself for a bit, but I brought you back the most delicious sweet bread with cardamom. This bread has long been one of my favourites, but I can't make it too often, as I find myself wanting to eat it for every meal, dessert and snack. It's a good thing I gave half of it away. 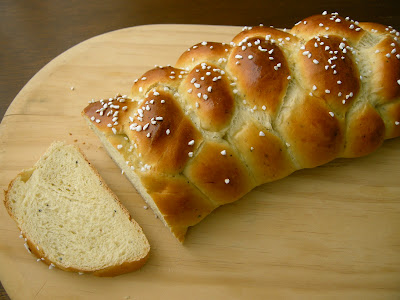 Here's the baked bread. I used the 6-strand braid, just because. I usually just do a simple 3-strand braid, but wanted the plumper loaf. The technique is easy. I watched this video, then found myself repeating the steps aloud as I braided. 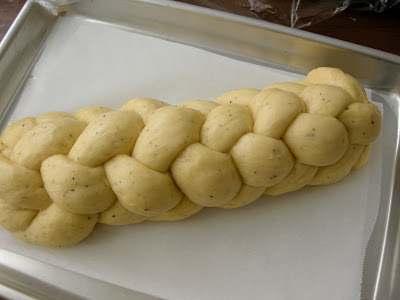 Here's the loaf before the egg wash, pearl sugar and baking. You can see the cardamom in it. I grind it in a mortar and pestle and never have the patience to make it really fine. Also, the cardamom I buy at a local Indian food shop is really powerful and I will reduce it a tad next time. If you're using pre-ground, definitely use the full amount. 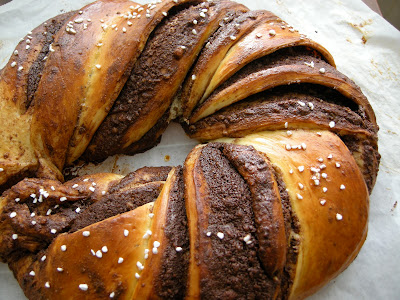 I used half the dough for the braid, but had a bit of marzipan left over, so I filled this loaf with a made-up mixture of marzipan, butter and melted bittersweet chocolate. It was a bit too gloopy and rolling it was a mess, but the end result was pretty tasty. I used chocolate because I actually made this in February for Lisa's Bread Baking with Chocolate post, which I think was due by the first of March. Oops. 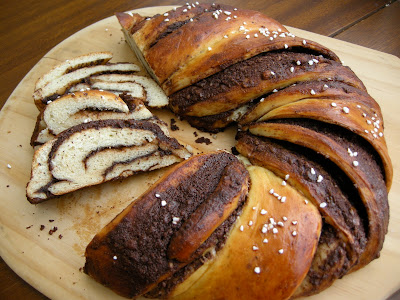 I used this pulla recipe from Julia at Melanger. The filling was equal parts of butter, marzipan and chocolate (about 100 grams each), but next time I will chop the chocolate instead of melting it. To make the swirl, I rolled the dough in a rectangle, spread it with the filling, then rolled it and cut it lengthwise before twisting it up. Joining the ends was tricky, as it there was chocolate everywhere by this point. It looked like this before baking: 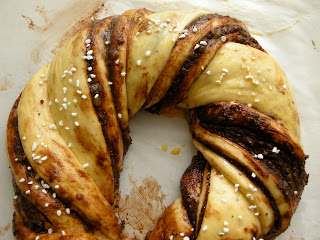 Notice that I cropped off the really messy bit. Anyhow, see you next week with the Daring Bakers reveal. I wish I had made more of this to eat while watching Nadal-Djokovic tomorrow. Sigh.

Mary, It's so nice to hear from you! I was beginning to wonder if you had decided to just pack-up everything and go sailing around the world.

All the breads look fantastic! So much so that I may have to look yeast in the eye again...and smile and beg. ;-)

Welcome back, Mary! Wordpress changed it so if you ever had an email registered with gravatar or Wordpress, they make you sign in. To get past that, use an email address never associated with wordpress, or use a fake email (or make a new gmail, hotmail or yahoo account) address if you don't have one not ever registered with Wordpress. This way you can comment and link your blog as usual. Whatver email you used this last time, I approved, so it should work next time :)

On that note..I will happily add your gorgeous bread to the round-up. Just tell me which photo you'd like me to use :) I LOVE the marzipan with the chocolate, and the cardamom in the braid sounds amazing!

Hurray, you're back! :) Lovely breads - the braid is beautiful, and the chocolate winding through the second one, oof. It makes me want to go and bake something right now.

It's up, Mary. Tell me if you want the title changed, or any other changes. It looks sooo good!

Now, what did you mean by blueshirts? The NY Yankees or NY Giants? LOL

Do you submit to FG or TS? Just asking so you can bring attention to it :)

Mary, how nice your back! With delicious bread to boot. I love cardamon (in fact I just baked carrot cardamon muffins yesterday morning), but chocolate and marzipan will win with me every time. Gorgeous.

Nice to see your post again, Mary. I haven't been regular with my blog too! Your breads look beautiful, wonderful creations! Have a good week!

Mary, I think yours is a great combination as well and it looks wonderful - even though you had some "issues" :) I wouldn't know which version to choose - yours or the original, cardammon one...I'd probably be eating both as I love marzipan as well as cardamon.

Loe Love Love how you twisted this bread. Looks fantastic!!

Glad you stopped by. Long time, no see!

It's great to be able to read you and appreciate the wonderful food you create! These breads are so beautiful! The braiding on the first one looks so intricate...

Both of these breads are beautiful but that chocolate one with the cardamom? YUM! Thanks for sharing!