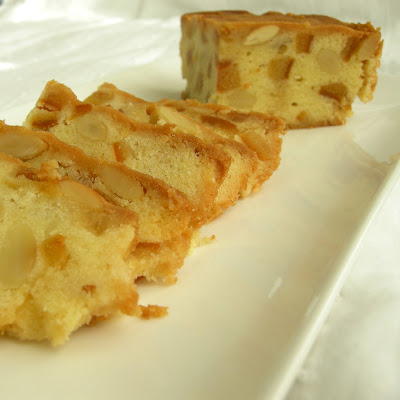 How would you finish that title? Fruitcake, right? I couldn't bring myself to put fruitcake in the title, because I am a lifelong and vocal fruitcake basher. I can't stand the stuff, but not so much because it's like a brick, but because it has raisins in it. Raisins, and nasty artificially dyed 'fruit'. Since when are cherries bright green? Blech. Nuts and booze and nice dried fruit are just fine with me, however. So, when I saw this cake I thought I'd give it a try. I wasn't sure, though, so it took a few years for it to make the move from bookmarked to baked. And another month and a bit to make the move from baked to blogged (and eaten), but at least I was bathing it in Amaretto for that month. The results were surprisingly good. I cut into one to share some with a friend and found myself unable to stop taking another thin slice, and another and then maybe just one more. Make it now and it'll be fab over the holidays.

Oh, I forgot the almost-best part: it's called Dowager Duchess Fruitcake! I think I saved it for the name alone. It's full of candied orange peel and almonds, but there is cake too, reminiscent of pound cake. The original recipe called for sherry, which sounded too dowager-y and dowdy to me. I used rum, then doused it with Amaretto, about ⅓ cup for each cake over a month, making it potent and tasty too. I won't get up on a fruitcakey soapbox and try to convince you that this is the fruitcake that will erase all your bad fruitcake memories like so many well-meaning folks have done to me, but I will say that I like it very much indeed.

Dowager Duchess Fruitcake
Slightly adapted from Martha Stewart
Makes 2-9" loaves, apparently, but it wouldn't fit in my loaf pan. I made 2-6" cakes instead from a half recipe

Yes! And, me too! (To those first few sentences.)
I've never seen a fruitcake that looked this good! Normally they're pebbled with fugly red and green bits and look as dry as cement. But I could easily see myself enjoying this one...especially since you drenched it in Disaronno!

Definitely not a fruitcake fan myself... I remember when I first came to America and was horrified by it. Pity, because the concept is awesome, as demonstrated by this cool recipe!

I love fruitcake, though not the leaden ones you normally get. Just one specific home baked version. This looks fab too though! I'm always up for boozy food.

Wow so glad you surprisingly loved this cake! I am a huge fan of fruit cake and so any one will be wonderful for me. You were very dedicated to tend to your cake over the month. It would have been worth it though. Looks delicious!

Wow that is a glamorous fruit cake if you will. Love the Amaretto lol. Thanks for the kind words and yet again seems we are on each other,s blogs at the same time ;-)

I would have to say that fruitcake has gotten a bad rap due to one old fruitcake that still gets passed around like a hot potato lol. Yours looks wonderful, and I've had many a wonderful, moist fruitcake using a variety of fruits. I love that yours is simple..orange and almond..no artificially colored candied fruits!!

Monkeyshines in the Kitchen said...

Wow, if I were ever tempted to ry a fruitcake, it would be this one. it looks so lovely, maybe just a teeny bite..