Does it ever seem that you run out of a lot of basic ingredients at once? My kitchen cupboards have been empty lately, and I  haven't even had time to stock up. May is a very busy month for substitute teachers, as schools run their last workshops of the year and teachers take a day off here and there to celebrate the return of the hot, sunny weather, or just to recover and write report cards. June is a different story, which means I should have lots more time to bake. Apparently I need the practice, as I broke 2 bowls getting this cake made. 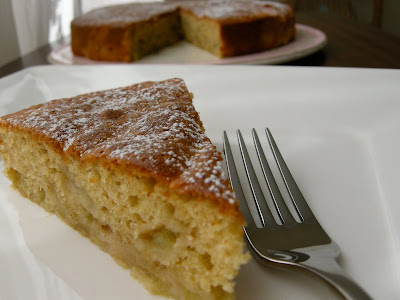 This week's recipe, chosen by Cindy of Everyday Insanity, was originally for a blueberry cake. I love blueberries in cake, but it's rhubarb season here. I did not get a chance to preserve any, so I am using what I've got in the fridge everywhere possible, as it's gone to seed and there'll only be a bit more in the late summer, but that's it. Sniff, sniff. The recipe called for all-purpose flour and whole milk, but I was out of these, so I substituted cake flour and orange juice. Actually, I ran out of cake flour too, so there is also ⅓ cup of buckwheat flour in mine, along with 2 cups of thinly sliced rhubarb. Instead of cinnamon I used a citrus-vanilla extract. And who has an 11"x17" pan? Not me. I used a 10" springform instead. 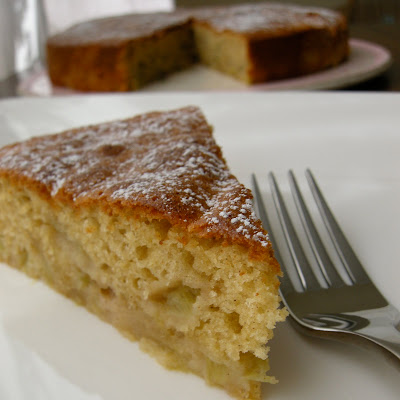 This recipe is called 'plain cake', but it was a bit fussy in its preparation. It called for separating the eggs and folding the beaten whites into the batter at the end, just before adding the fruit. I was going to skip that part and just add the whole eggs to the batter, but I had changed so many other things that I followed the directions for once.  A small part of them, at least. The cake turned out to be delicious, I am happy to report. It had an interesting citrus flavour from the juice and extract, and a tart, jammy layer of rhubarb mostly near the bottom. It was very tender and moist, and the buckwheat added speckles and a faint taste too. It was quite sweet, as is typical for this book's recipes, so I was glad to have the sourness of the rhubarb to balance it out. It would be great with a bit of cream, if you didn't want to serve it plain. Since it was so yummy, I guess I can leave off grocery shopping for another day and see what kind of substitutions I can come up with next. I still have a few things in the cupboard...
Posted by Mary at 11:22 PM

Wow, I am so impressed with your resourcefulness! I like all of your substitutions, I have rhubarb just waiting to be used, Thanks for playing along with me.
p.s. I now have an 11x7 inch pan! Purchased just for this cake.
I thought this cake was excellent.

And yes, it's definitely feast or famine when it comes to baking ingredients.

I am so in love with Rhubarb! I have some cool recipes too, can I send them to you via your profile page?

I think you win the award for Best Improvisation!

I am all for using up what you have, and rhubarb is an excellent choice for this cake.

Oh, that looks good with rhubarb. My husband would love it! I thought beating the egg whites was a bit of a pain and mine went strange, but the cake turned out.

I bet the rhubarb was fabulous in this - beautiful job!

yup i just ran out of olive oil and grapeseed oil at the same time!

your cake looks lovely and using rhubarb was a great idea!

I have great satifaction when I use up random items, Lovely baking.

Oh you made me chuckle today. :-) LOVE your inventive spirit. :-)

I think I picked up a tip or two from you on how to make a cake with what you have on hand. My fav - cake flour and OJ for plain flour and milk!

Rhubarb!? I haven't had that in years. Bet it was good with the caramel cake. Sweet/tart!!

Rhubarb would be great in this cake! Sounds like your pantry is really cleared out now.

Nice way to make it work for the ingredients you had on hand! I seem to always be short on something. The rhubarb sounds delicious!

Haha, it's really funny what you made of this "blueberry"-cake! Interesting to hear that rhubarb works fine, because I LOVE rhubarb!

Hi There, This is looking Gorgeous. A very well made post with beautiful pictures. Loved the new combo of ingredients and the recipe is so nicely made and presented. Its always fun to see ur appetizing recipes.Saving this recipe of urs and wud love to give ur version a try on the coming weekend. Have a great day….Sonia !!!

This looks like a perfect way to use up some of the rhubarb!