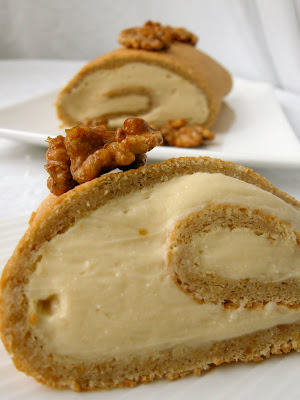 I love maple. I'm always a bit sad when sugaring-off season is over, even if it means the weather is above 0℃ on a regular basis. This year I didn't make it to the sugar bush at all, but luckily I still have lots of syrup from last year. I have lots of walnuts too: I won over a kilogram of fantastic walnuts from a giveaway on Evelyne's blog, Cheap Ethnic Eatz. They arrived when I was in Toronto, and I've been trying to decide what to do with them ever since I got home. As usual, I have lots of ideas, but can only eat so many sweets! Watch for more walnutty goodness around these parts, as this recipe only used about a half-cup.

I decided to make a small rolled cake, substituting walnuts for the almonds. For the filling, I went with mascarpone and maple syrup, because that is one of the loveliest combinations ever. I was worried about the maple syrup thinning out the filling too much, so I reduced mine, ending up with maple fudge. Now, maple fudge is a very good thing, but not what I wanted here. I used it anyway and it dissolved in the mascarpone, but I don't think reducing it was necessary, so I've adjusted for that below. I also couldn't resist garnishing with a few maple candied almonds. 3 components seems like a lot, but this actually took less than an hour to mix, bake, cool and roll. A quarter sheet pan measuring 33cm x 24cm (13" x 9.5"), made enough for 4 servings, so double everything if you want to make it in an 11" x 17" pan and serve 8. Measurements are in grams, as the amounts were small. 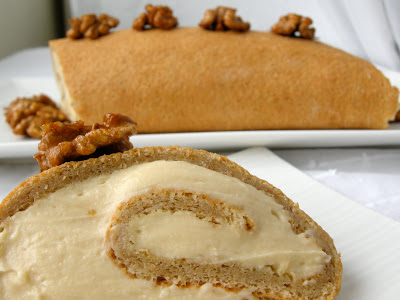 Maple Mascarpone Filling
Adapted from the Cake Bible
1-227 gram container mascarpone (1 cup)
¼ cup pure maple syrup
⅓ cup whipping cream
Combine all ingredients in a medium bowl, and beat briefly, by hand or with a mixer until mixture thickens. Refrigerate while waiting for the cake to cool.
To assemble cake:
Unroll cake, remove towel and spread mascarpone filling evenly with a metal spatula. Leave the last inch of cake bare, as rolling will push the filling to the end. You won't need all the filling, unless you want a ridiculously full cake like mine. Re-roll and trim ends on the diagonal. Refrigerate, covered, until serving time. Garnish with candied walnuts.

Update:
I took the cake to some overworked friends, who said that it looked like a giant Twinkie. Exactly what I was aiming for...
Posted by Mary at 5:11 PM

I am so happy you got all those lovely walnuts and this a fabulous first creation with them. Love the maple syrup and mascarpone combo. I am always a little sad too at the end of maple syrup season.

What an amazing creation for overworked friends... am sure they would have really appreciated it.. Looks amazing too :)

Mary you made such a wonderful dessert ! I wish I was there to taste a bit !

Thanks a lot for your comment!
You definitely have to join MacAttack!
And by the way, your creation looks great, I really love the idea of making a roulade for this challenge!

Wow, this looks delicious! Love the thick, creamy filling. I can imagine just how it tastes, and I want a slice!

That is so gorgeous, I have yet to make anything with maple Lovely

Sigh. :-) Maple is my favorite flavoring for dessert and adding nuts to it just makes my heart happy. Beautiful dessert, Mary. :-)

Perfect use of walnuts. Looks delicious.

wow amazing pictures a and recipes! I saw you on the daring baker! good job and love the blog!

Mary, this looks delicious! The whole maple/sugaring thing is a mystery to me. I'd love to see a post on the whole maple season and what exactly happens. BTW thank you for following up in the German chocolate cake! Take care!

What a gorgeous roulade! I laughed when you reported the comparison to a giant Twinkie. Hmm, maybe not.