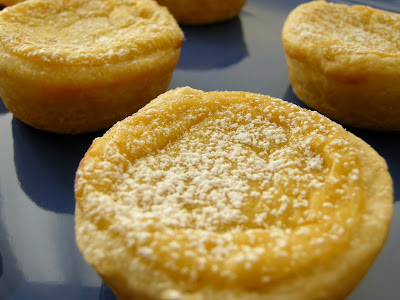 I have always wanted to make custard tarts, and even have a number of recipes bookmarked, dog-eared, photocopied and handwritten(!). Like many things I want to make, it was on a list and had to wait its* turn. This list does not exist on paper, but rather in my head, where items on it come and go, depending on the whims of my memory and what I'm craving at the moment. 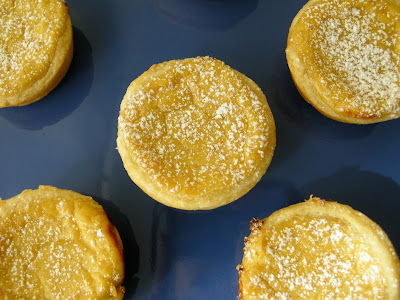 The reason this recipe vaulted to the top of the list is that I signed up to test it for Food52's contest on late winter tarts. The recipe is by a member called checker, and you really should read the original post here, as the instructions are much funnier than mine. I really enjoy testing the recipes, but I always worry about giving feedback on them. What if I don't like it? I don't want anyone to think I'm a big meanie. For that reason, I only choose recipes I am confident I'll love, and this one fit that category nicely. The other difficult thing about testing recipes is making them as written. I find this a very difficult task, which is why I only test a recipe a month. Of course, next time I make this I'll make some changes, but minor ones. I'll eliminate the cinnamon and citrus peels. That's it. That's not a big change, is it? Then, for me, they'll be perfect: custardy but not too rich, and with a very flaky pastry.
Rough puff pastry
makes more than enough for 12 tarts
Source: Gordon Ramsay via BBC Good Food
250g all-purpose flour
1 tsp salt
250g butter, at room temperature, but not soft (I used chilled)
about 150ml cold water

I gave mine an extra turn, just for kicks.
Custard
Source: checker, a Food52 member. Here is the original text of the recipe.
4 extra-large egg yolks (I used 6 large yolks)
1/4 cup heavy cream
1 3/4 cup whole milk
3 tablespoons turbinado sugar (I doubled this)
2 tablespoons all-purpose flour
pinch of salt
1/2 teaspoon vanilla extract
1/2 cinnamon stick
1 1" piece lemon peel
1 1" piece orange peel
cinnamon for dusting
icing sugar for dusting
There should be a photo of one with a bite out of it right about here, but it was impossible to stop after just one bite. Maybe next time....
*It's not "it's", it's "its" for possession/belonging/attributes. I'll rant more about that another day.
Posted by Mary at 8:31 PM

These sound delicious Mary! I've never had custard tarts before, but I know I'd like them! I can only imagine how yummy they would be... I'd probably like them your way {with out the cinnamon and citrus peel} :)

I love tarts, this are adorable and I bet so very tasty. Thanks for sharing.

Yum! These look delicious, and I think I have all those items on hand! Thanks for posting the recipe!

Well done for crossing this recipe off your list. I've wanted to make these for a while too! They look absolutely delicious...so golden and custardy!!

Who can stop after just one bite :) I know I can't. They look wonderful!!!

I love custard tarts. Yours look perfect! I made some portugese egg tarts recently but these look miles better!

I adore custard tarts, and these are beauties!

I love coming here because of recipes like this. You make the most interesting and delicious looking goodies.

I haven't crossed these off my list yet. I need to get on it, these look so yummy.
Mimi

Yummy! I love custard tarts. Every time I see one I think of a British comedy I used to watch with my parents. I'll have to try and make these sometime. My dad would appreciate them as well.

Great looking tarts! You're funny, giving a negative feedback doesn't make you a meanie, you're entitled to your own opinion. I think an honest opinion is better than flattery. :) I also think the "you're" and "your" sits right up there with the "it's/its" rant! :)

Right you are about its/it's -- and I have to think about it every time I write it!

I just dont get this! For the past few days, wherever I look (tv, magazine, blogs) I just see custard tarts everywhere and now you come along with these gorgeoud mouth-watering custard tarts. You're killing me!! They are just too gorgeous. Have never tried them with rough puff pastry though, guess I'll have to rethink my plans for the weekend :-))

Yummy! These look delicious. Thanks for sharing.

Yours certainly look lighter than mine. Delicious. With eliminating what you plan to, I think my recipe (for Portuguese Tarts)will almost be the same as this one. I had my first "boughten" one the other day at a pastry shop "famous" for them - and I was pleased as punch with my creation. There was NO comparison to my homemade tarts. The pastry was just sensational... and the creamy custard compliments it well. It was a fun learning experience, but as it isn't part of my heritage, or a significant taste craving, I know I won't make them often. But, love that I can!
:)
valerie

Can we have lots when we visit, please?