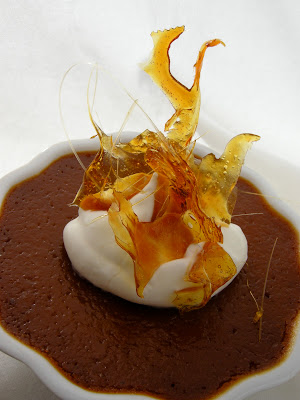 This week's recipe came a week after Canadian Thanksgiving so the smart and efficient thing to do would have been to make it a week in advance and serve it at the family dinner. I didn't do that, not only because I rarely choose the efficient way, but because I was worried that it wouldn't be as good as my regular recipe. I make a good pumpkin pie, if I do say so myself (I guess I just did). Anyway, I didn't even get my own pie made this year for the holiday, as it was a busy weekend. Instead, I melted my pumpkin ice cream down and used that as pie filling the next day. It was amazing--custardy and bright orange, just the way I like it! So good, that my mother called to see if I had told my sister-in-law I had also left some behind for her. She wanted to keep it all to herself. Luckily I hadn't said anything and my mother got 2 her pieces of pie. If you want to use that recipe you don't need to freeze it first, obviously. I'm all about efficiency, you know. 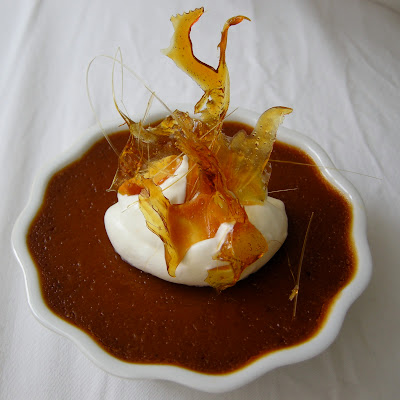 What does all that have to do with this week's recipe? Not much. I decided to make this pie in ramekins rather than in a crust for a change. I also decided to switch up the flavouring, as I find pumpkin pie sometimes just tastes of the spices rather than of the pumpkin. So, out came my favourite homemade essence: extrait antillais. I know I have mentioned it a number of times, but it's vanilla beans, tonka beans, sapote and mace marinated in rum. I sometimes use this to replace rum and vanilla and that's what I did here. Forgetting that I wanted to go light on spice, I added small amounts of fresh mace, nutmeg, sapote and tonka bean. Unfortunately, the spices completely overpowered the pumpkin and I found it inedible. I ate 2 to be sure. I guess the extrait has been sitting long enough that it's really powerful. Anyway, they looked pretty enough, but this recipe won't be replacing my regular one, as the texture wasn't as nice. And the colour! The caramel was delicious, but it darkened the filling enough that it looked like canned. Eeek! I know I ranted about this when I made the ice cream, so I won't do it again, but just look at this: 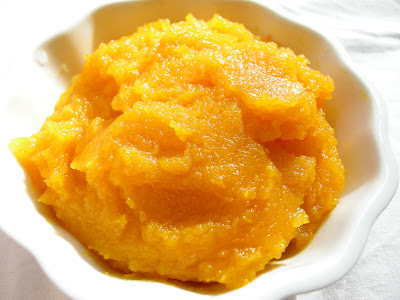 This week's recipe was chosen by Janell of Mortensen Family Memoirs. Great pick, and sorry I screwed up! As always, head on over to the TWD site to see what everyone else baked up. Should be good--lots of positive comments this week. Some pumpkin-haters may even have become pumpkin eaters. :)

Update: Hmm, just had a friend over for dinner and I let her try the reject pumpkin pie. She took them all home, so maybe they're not as bad as I thought. She's going to mix them with ice cream to tone down the spice a bit.
Another entry for Torview's Orange recipe month! 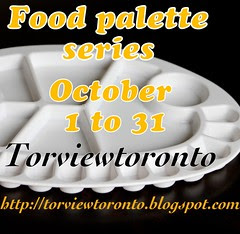 Wow! Look at that sugar on top! Looks and sounds fantastic. I thought about going crustless, too. Maybe next time.

Gee, they look really lovely - pity about the taste. I have never made pumpkin pie. No one really does in Australia. I think I would like it though. Pie crust, pumpkin and spices...sounds delicous! Maybe you could post your pie recipe. I'd love to see!

Your pies look so pretty with the spun sugar on top! I have heaps of leftover pumpkin in the freezer too - it's hard to know how much to boil up to make 1 cup.

That is downright gorgeous!

Where have you and your pumpkin pie recipe(s) been all my life? :~)
Seriously, if the pie from my past looked like this, I would have never had any issues with them. Pumpkin pie ice cream filling, seriously?! Wow.

I love the artisic direction you took too!

What a gorgeous presentation! Too bad the filling was disappointing. I'm with you, though -- I'm sticking with my tried-and-true recipe.

I love your caramel shards...too bad you didn't love the filling though

That's the prettiest pumpkin pie I have seen!

I'm in awe. Your pie is so fantastically beautiful. I'm jealous. I'm so mad mine did not even turn out right. I'm going back to my tried and true recipe for Thanksgiving.

Mary this is stunning!!

That sugar is gorgeous, Mary! :)

oh my goodness - you outdid yourself! gerat job!

You sure made this pie look good, whether you were pleased witht the taste or not. Spun sugar makes it stand out above the crowd.

thank you for linking this delicious pumpkin pie

I would expect this from a fancy restaurant!

Oh Mary, you did a fantastic job!! WOW!! I just love the extra effort you put into making this stunning dessert. :-)

I love anything pumpkin, and this is absolutely gorgeous!

I like the idea of making it in ramekins with no crust... so much easier that way! Sorry it wasn't the best, but it sure looks cute!

Wow! Your "pie" is so refined and fancy! Much prettier than mine... well done!

Thanks Mary, I'll keep a look out for the pumpkin pie recipe!

Yours is the prettiest of the Pumpkin-Caramel pies I've seen this week. I love that sugar topping. The extrait antillais sounds delicious.
I just roasted and pureed a batch of pumpkins last night myself. But I turned it into soup. It wasn't even close to being as light as yours.

I love the presentation. Fancy yet elegant. And that extract sounds amazing!

my goodness, that looks so flash!!!

Love love love the sugar on top! Bummer that you didn't like this much. Glad you friend did though! :)

Mary that is sooo beautiful. Love it!

Very nice! Your pictures is amazing.

I think I would have loved it spicy or not! Love that cream and caramel on top! so fun! the idea of melting ice-cream to make pudding has me baffled .

Love pumpkin pie and great idea to serve it in a ramekin. 5 star presentation

I love your caramel decorations! I didn't get a chance to make this one yet (and probably won't until American Thanksgiving), but I'll keep in mind not to spice things too much.

Pumpkin ice cream. Thanks for the reminder - I haven't made any yet.

looks gorgeous--i'm sorry to hear you weren't crazy about it. that extract you make is intriguing...i would like to make it someday...i have everything but the sapote, so i'll have to look for it. i've had sapote fruit when we lived in australia...i didn't know that the seed could be used as a spice!

I absolutely adore pumpkin and caramel and the combination of the two sounds to die for! I will definitely be recreating this!!