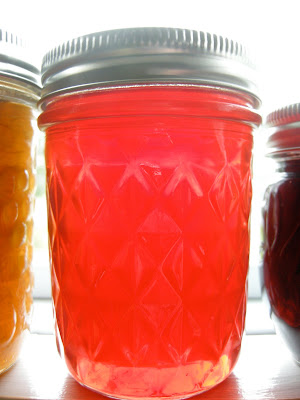 This month's Daring challenge was to preserve some of summer's bounty, in jars, or by freezing. What a great idea, as I know lots of Daring Cooks had been eager for just such a challenge. The theme was selected by John of Eat4Fun, who is a longtime member of the Daring Kitchen. I have been canning and preserving things since high school, but I loved this challenge! I made 10 things in a 3-day preserving spree, which coincided with a 33℃, high humidity heat wave. I think I may have contributed to that, with all the boiling pots. Above you can see crabapple jelly, the prettiest of the lot, I think. I had never made this before, and it turned out very sweet, but will be perfect for glazing tarts, or just eating on bread... 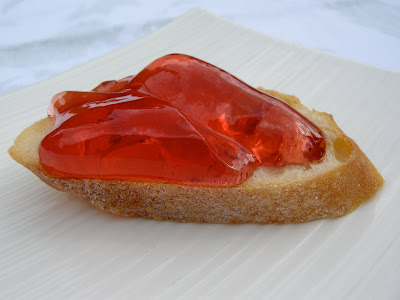 This is how many crabapples it took to make 5 x 250ml jars: 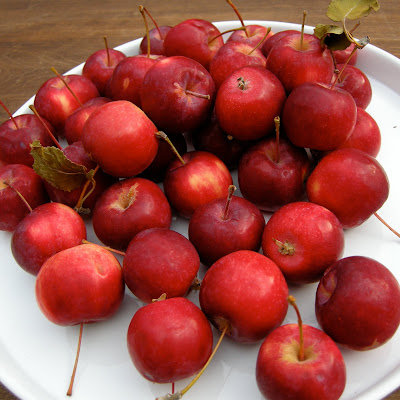 Next up was plums, of which I had a veritable windfall. My aunt's neighbour's tree was covered in fruit that nobody knew what to do with. I got about 5 kilograms and made 5 small jars of of plum-cardamom butter and 12 small jars of plum jam. 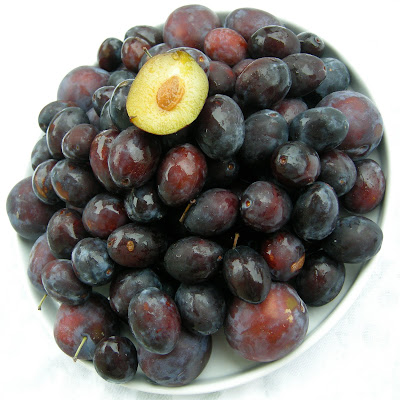 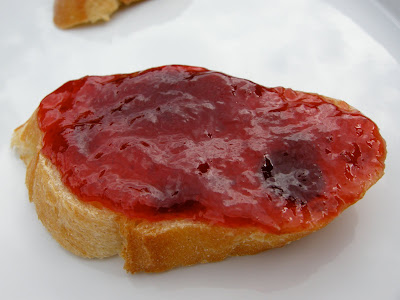 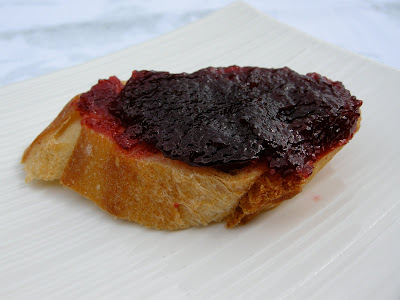 The difference between butter and jam is that a butter has less sugar and is cooked longer, to a thicker consistency and darker colour. I think cardamom and plums are perfect together.
I also made a jar of peaches, spiced with rum, tonka beans, mace, sapote and vanilla. The extra syrup from this was great with yogurt: 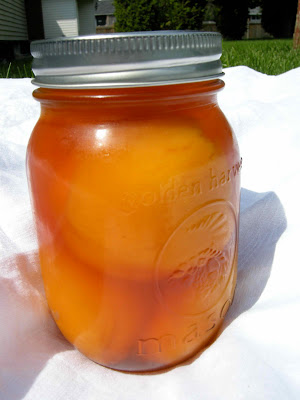 On to the savoury things. I helped my mother to make pickled beets (5 kg worth) and chili sauce (25 kg of tomatoes). Next, I saw a recipe for a beet and horseradish relish using roasted tomatoes. I don't usually love relish, but I really wanted to try this recipe. It's from The River Cottage Preserving Handbook, and you'll find it after the jump. I got my orange marmalade and rhubarb jam recipes from the same book. This book does not often recommend processing jars in a boiling water bath, but is reliable, I think. There was a lot of discussion on the forum about processing and it seems to US recommendations are much stricter than in other parts of the world. I usually always finish my jars in a boiling water bath, but I was surprised to learn that my mother and all her relatives do not, even when working with low acid foods. To quote her: 'nobody's died yet'. No, but I still boiled my jars. :) 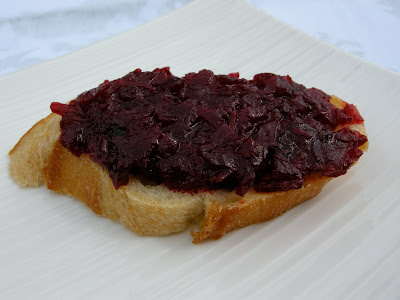 This stuff is fantastic--sweet and tangy. It called for fresh horseradish, which I found growing in my mother's backyard, but you could use prepared. Here's what the fresh looks like: 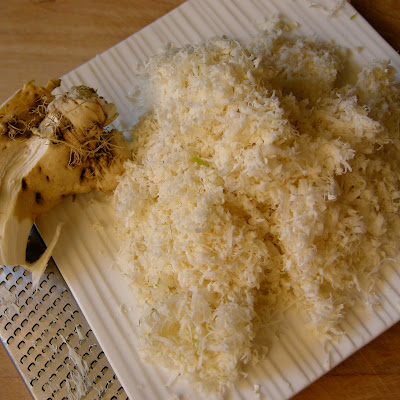 Here's a fairly bad picture of everything but the plum jam lined up on the windowsill: 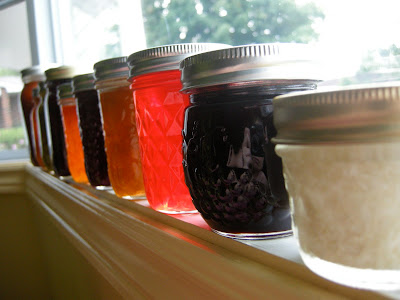 Left to right: chili sauce, rum peaches, bread and butter pickles, pickled beets, orange marmalade, beet relish, rhubarb jam, crabapple jelly, plum-cardamom butter, pickled horseradish
The orange marmalade was made this winter, for a Daring Bakers' challenge, and the rhubarb was made this spring.
Blog-checking lines: The September 2010 Daring Cooks’ challenge was hosted by John of Eat4Fun. John chose to challenge The Daring Cooks to learn about food preservation, mainly in the form of canning and freezing. He challenged everyone to make a recipe and preserve it. John’s source for food preservation information was from The National Center for Home Food Preservation.
Original challenge PDF and recipes

Roasted sweet beet relish
Makes 5 x 225g jars
Source: The River Cottage Preserves Handbook, by Pam Corbin
1 kg young, small beets, trimmed
a little olive oil
250g granulated sugar
150ml red wine vinegar
2 tbsp balsamic vinegar
1 large red onion, peeled and finely chopped
50g freshly grated horseradish root (or prepared horseradish)
For the roasted tomato puree:
1 kg tomatoes
2 level tsp sea salt
4 garlic cloves, peeled and thinly sliced
50 ml olive oil
Preheat oven to 180℃/350℉. For the tomato puree, halve the tomatoes and place them skin side down on a baking tray. Sprinkle with the salt, garlic and olive oil. Roast for an hour or so, on the bottom rack of the oven, then remove. Pass through a food mill to remove the skins and seeds. You should end up with about 300ml of intensely flavoured puree.
Meanwhile, put the beets into a baking dish and drizzle with a bit of oil. Roast, above the tomatoes, for 1-1½ hours (longer if necessary) until the skins are blistered, blackened and loosened. Leave to cool a little before peeling. The skins will slip off easily. Coarsely grate the beets.
Put the sugar, vinegars, onion and horseradish into a large saucepan, bring to the boil and cook for 5 minutes. Stir in the tomato puree and cook for a couple more minutes. Finally, add the grated beets and cook for about 10 minutes, until thickened. Transfer to hot, sterilized jars and seal. Use within a year, and refrigerated once opened. I processed these in a boiling water bath for 10 minutes.
This tastes wonderful with cold meat and fish.
Posted by Mary at 8:32 AM

You made some beautiful items! Last night I canned some hot & spicy pickles! It's such a joy to can!

I love the beautiful colors of all of the amazing flavors you put together. That is amazing that you have access to so many fresh ingredients, too - that must make everything that much more fun!! Really impressive.

Awesome, great job - Do you need my address to send some over?

Monkeyshines in the Kitchen said...

what beautiful jams! Almost too pretty to eat (but we still manage somehow, don't we?!). I love the idea of putting up horseradish - will have to do that soon.

wow you really went above and beyond for this challenge, it all looks so fabulous! love the bright color of your plum jam!

I had no idea how much went into a jar of preserves! Wow. Now I know who to turn to for fruit in the dead of winter. :D
The colours are so beautiful.

Wow, your jellies, jams and butters look gorgeous! I am so jealous of all your fresh produce! And the crabapple jelly's color is sooooo pretty, great job!

Look at you canning like a mad women in a heat wave. great job! I love the crabapple one best I have to say.

Wow! Look at all the canning that you got done! So many of these recipes look so delicious. You're making me want to go on a canning spree, too! :D

Wow!! You are a whirling dervish of productivity, Mary!! LOVE these glistening jars of deliciousness. Great job! :-)

Your are truly the queen of the preserves, Mary! These are glorious. You're right about the crabapple jelly - it looks so beautiful. But then they all do. I LOVE the sound of the beet and horseradish relish. The River Cottage Preserving Handbook is on my wishlish and this is just another reason to get it.

I love your lineup! The colors, the variety, the joy that comes through! Thank you for sharing your espertise and your enjoyment with us!!

Gorgeous work! Your crabapple jelly is so clear and the plum cardmom butter sounds delicious.

Beautiful pics n gorgeous colors! Love the jelly that you made!

You are a canning fiend, and I mean that in the best way! That's so awesome that you are so comfortable with the process to be able to knock all of these stellar recipes out! The beet horseradish relish sounds really intriguing - really great job on the challenge!

You are right! The crabapple jam is gorgeous. But what really made me curious was the pickled horseradish. Unfortunately I'm quite sure I won't find fresh one here:(
Anyway, you did a great job. Congrats

So many jars and spreads! You went all out for this challenge! Amazing job!

What a beautiful display! You'll enjoy those for a long time. The plum jam looks absolutely irresistible.

Absolutely divine! I love that aI am reading about preserving all over the web right now...but, you take the prize! WOWOWOWOW! There is truly nothign more gorgeous than crabapple jelly. Yours is sparkling and the photo of it on the bread blew me away! I use those same apples to make a liqueur called Pommette that I learned to make in Northern France. Fill a crock with the apples, add 1 cup of sugar to enough vodka to cover them, dissolve it and cover turning now and then. It will be ready at Christmas and is excellent straight, chilled with a twist of orange zest!
I would love you to have a feedburner subscribe by e-mail plug in attached to your site sot that I could get all of your new posts into my mail box.
:)
I have one that is not feedburner, but it will give you an idea. I never get to feeds or readers ina timely fashion
:)
Valerie

Your crabapple jelly is gorgeous. Growing up we had a crabapple tree and my mom always made jelly and spiced crabapples. Delicious!
Mimi